Yukie is not given a sprite in any version of the visual novels.

The 2006 anime, manga, and Higurashi no Naku Koro ni Mei depict her with long brown hair tied into a braid. In Mei, she has brown eyes and wears a green outfit.

Yukie is very compassionate and understanding, but she also enjoys teasing her husband. At times she will punish Akasaka if she gets suspicious, like in Matsuribayashi when Rika calls him "papa".

In Higurashi Mei, Miyuki describes her as frightening when it comes to studying.

The manga says that Yukie was born with a weak constitution.[1] She married Mamoru Akasaka and became pregnant in 1978. She was admitted into a hospital and awaited Akasaka's return from his trip to Hinamizawa.

In some arcs, Yukie dies in an accident falling down some stairs. Fortunately, her daughter Miyuki was born with no complications.

Yukie is introduced. Akasaka regrets having to leave her when she's preparing to give birth, but Yukie tells him not to apologize and just go, as she knows how important his job is.

Akasaka attempts to call Yukie's hospital after the investigation but every phone he goes to has its line cut. When he returns to Tokyo, he learns that Yukie died in an accident. She had a habit of going to the hospital roof every night to cool off and took the stairs every time, feeling like she could give Akasaka her distant support standing under the stars. One night she slipped and fell down the stairs, dying. Despite this, Miyuki was born and came out just fine. Akasaka realizes that Rika's warnings to go back to Tokyo were to help him save Yukie.

Yukie is alive in this world. Akasaka heeded Rika's warning in 1978 and returned straight to Tokyo, where a janitor got injured after slipping on the roof stairs. Akasaka sees that this could've happened to Yukie and thanks Rika for saving his wife's life.

Akasaka and Yukie go on vacation to a hot springs in Wakura in 1983, though Akasaka stops in Hinamizawa for a while. 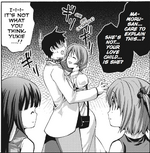 Yukie is alive in this world. Rika told Akasaka to call Yukie and he did so, warning her to be careful. Akasaka, Yukie, and Miyuki later visit Hinamizawa on vacation. Though Akasaka has to leave them for a bit because of Rika's plan, Yukie and Miyuki secretly follow Akasaka to the Watanagashi Festival and pretend to run into him. Yukie torments Akasaka after Rika calls him "papa".

Yukie is alive in Miyuki's original 1993 world. A version of her is introduced in Part 2 when Miyuki and Nao return from 1983, however they discover they're in an alternate world where the dam project was successful. Yukie and Chisame pick up Miyuki and Nao at the former Hinamizawa site. Chisame attempted to cover up Miyuki's disappearance for a few days when she went to inspect the village and Yukie found out when she was gone for too long. The group travels back home, with Yukie showing some concern for Nao upon hearing her mother is always working. Yukie drives Nao home after dropping off Chisame and Miyuki, accepting her as Miyuki's new friend.

Meanwhile, in the alternate 1983 world Kazuho travels to, she discovers that Yukie died in that world when she fell down a set of hospital stairs, and the unborn Miyuki died with her.