Yukari Sakaki (榊由香里, Sakaki Yukari) is the main protagonist of Utopia. Yukari is a girl who comes from a poor, dysfunctional family, for which she is quite cruelly bullied.

She starts being bullied by a group of boys because, after her mother's death, she stopped caring about her appearance and did not change her clothes or shower.

Later in the story, her whole class becomes bullies because of Sumire, but even then she didn't lose hope because she saw Marie fighting for her. After being transferred to another class, she actively tries to stop bullying, so no seeds of it spread beyond control. 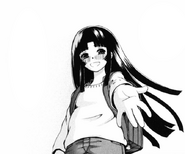 Yukari in the Manga.
Add a photo to this gallery

Retrieved from "https://07th-expansion.fandom.com/wiki/Yukari_Sakaki?oldid=81187"
Community content is available under CC-BY-SA unless otherwise noted.