Watanagashi (綿流し編, Watanagashi-hen, lit. Cotton Drifting Chapter), also known as the Cotton Drifting Arc in the manga, is the second story arc and Question Arc of Higurashi When They Cry. It was released on December 29, 2002 at Comiket 63 and is followed by Tatarigoroshi.

The original release of Watanagashi includes the previous chapter.

How was your taste of life in Hinamizawa?
A curse, or a conspiracy... I believe you have fully enjoyed everything and everyone seeming suspicious.
Here at last. It is no surprise attack, but a real, direct incident. Please enjoy it.

The difficulty is lower than Onikakushi, but is extremely vicious.

Keiichi Maebara enjoys life in Hinamizawa and has fun playing games with his friends at school. During a chance encounter he meets Shion Sonozaki, the supposed twin sister of Mion Sonozaki. Keiichi and Shion develop a friendship, and during the Watanagashi Festival they sneak into the ritual storehouse and learn about Hinamizawa's horrible past, soon setting off a chain of events and earning the wrath of Oyashiro-sama's curse.

A drama CD adaptation of Watanagashi was released on December 22, 2005. 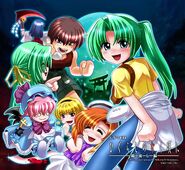 The manga adaptation of Watanagashi was illustrated by Yutori Houjyou and serialized in Square Enix's Gangan Wing magazine from June 2005 to May 2006. It was later collected into two volumes. Yen Press published them in English under the title "Cotton Drifting Arc".

The entire arc was re-released as a single omnibus volume in Japan on December 22, 2008.

The 2006 Higurashi When They Cry anime by Studio DEEN adapted Watanagashi in Episodes 5 to 8.

The original light novel adaptation of Watanagashi consists of two volumes. It was originally published by Kodansha and republished by Seikaisha.

Novel versions of Watanagashi intended for junior students were published by Futabasha, consisting of two volumes. Both volumes released on December 16, 2020.

These are the credits as seen in the original Comiket release.