Warcat, officially designated The 0017th Aerial Augmented Infantry Squad, is a squad that belongs to the AOU.

Miyao and Jayden are the main attacking members while Gunhild provides support.

Currently the strongest kette among all of the AOU's Aerial Augmented Infantry. After fierce battles against powerful rivals, they won their seats as representatives of the AOU at the International Battle Standard Festival.
Their kette is composed of two Attackers and one Defender.
They use the kuruma-gakari formation, which theoretically switches out Attackers for Defenders before they get tired, thereby ensuring that they're always able to carry out their mission with two active Attackers.

However, in most cases, the Attackers Miyao and Jayden carry out their mission before they're hardly tired at all, so Gunhild — who's waiting in reserve — rarely has a chance to move up front. The fact that they're this powerful, yet still have a member in reserve, makes them a significant threat to kette in other factions.

The way they can penetrate an enemy's defenses on their own, achieve air superiority in the skies over their target, attack a land-based target, and then offer air support to friendly forces...makes them more than a military unit, and practically superheroes.

Warcat is formally introduced in Chapter 2 at the International Battle Standard Festival. After the festival, they train with Grave Mole.

In Chapter 11, Warcat is sent into their first proper combat mission to destroy COU military vehicles stationed on the Glass Sea.

In Chapter 22, the COU continues to pursue occupation of the Glass Sea and starts building bases. Warcat is deployed once again to destroy them.

In Chapter 23, Warcat defends against the drone revolt.

In Chapter 25, Warcat heads into one last battle for the Glass Sea before the second global truce. Gunhild's Keropoyo starts a self-diagnostic and shuts down, making her unable to deploy her Rejection Shield with a cluster of missiles flying towards her. Gunhild is presumably killed.

The tab of Warcat on the official site.

Image of the Warcats from the Ciconia Pre-release Trailer.

Image of the Warcats from the Ciconia OP. 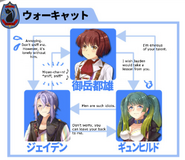