WanyaDora (わにゃドラ, WanyaDora) is a fictional video game featured in several Ryukishi07 works. The mascot character, the wanya (also called a wanyan or meowoof) has also been featured in his works, sometimes as an author avatar. The wanya has also been referred to as "Namekuchi" and as a slug.[1]

It can be surmised from scenes in Ciconia that WanyaDora focuses around collecting and trading resources and monsters, combining them to become stronger.[4][5] Collecting hearts from friends[6] and engaging in pvp[7] are also main features. Monsters also have rarities[8][9], similar to gacha games. Convincing people to install the game presumably gives players bonuses.[10]

A wanya from the Twilight of the Golden Witch manga

Namekuchi the slug from The Untold History of Japanese Game Developers

The wanyas on Shuuichi and Shintani's neck stumps 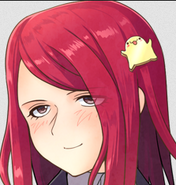 The wanya plush in Nekodamashi-hen Part 2

The wanya plush in Satokowashi-hen Part 6

The wanya plush in Kagurashi-hen Part 4