Requiem of the Golden Witch

Twilight of the Golden Witch is the final installment of Umineko no Naku Koro ni Chiru, and the eighth and final episode of the main Umineko When They Cry series, concluding the story. It was released at Comiket 79 on December 31, 2010.

The original release of Twilight of the Golden Witch contains the previous 3 episodes. In other words, it is effectively the full Chiru release.

Good morning.
To think that this is goodbye brings me great sadness as well.

I have prepared a farewell party for this night.
There will be a game tournament as well, so I ask that you participate with vigor.

Like pepper, the difficulty comes in tiny yet spicy grains.
Why not participate yourself, now at the very end?

The final episode focuses on Ange, who in her quest to discover the truth behind the events of the Rokkenjima Mass Murders is given the chance to go to Rokkenjima as a six-year old by Battler. The central conflict revolves around the struggle between Battler and Bernkastel to convince Ange of their own perspective towards how she ought to approach the truth and her quest for it.

This episode is the first episode with features that require direct interaction from the player, allowing the player to unlock extra scenes as well as make the choice between two endings.

Chiru was officially translated to English and released by MangaGamer on November 17, 2017.

Umineko no Naku Koro ni Saku released as a compilation of every arc on PC on October 4, 2019.

The manga adaptation of Twilight of the Golden Witch was illustrated by Kei Natsumi and serialized in Square Enix's Gangan Joker magazine from February 2012 to July 2015. It was later collected into nine volumes. Yen Press published them in English in three omnibus volumes.

The manga version of this arc began serialization in February 2012, and was drawn by Natsumi Kei. While the general plot of the episode is still the same, the manga version contains substantial changes, adding additional scenes and providing more explicit answers to the mysteries of the story.

Major changes are as follows: 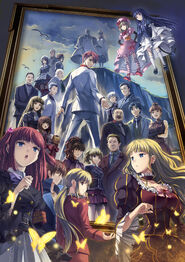 The cover art by Takahito Ekusa