Tsumihoroboshi (罪滅し編, Tsumihoroboshi-hen, lit. Atonement Chapter), also known as the Atonement Arc in the manga, is the second story arc of Higurashi no Naku Koro ni Kai and the sixth in the overall series. It was released at Comiket 68 on August 14, 2005 and followed by Minagoroshi.

The original release of Tsumihoroboshi includes the previous chapter.

- Atonement Chapter -
How Is your reasoning toward the truth coming along?
The next tragedy Is ready for you. Enjoy.
This is a humorous story with a tragic struggle at the end.
The difficulty is zero. You can just enjoy the clowns milling about.

This chapter has perspectives switching between Keiichi Maebara and Rena Ryuugu. Rena's divorced dad is dating a new woman named Rina. When Rina tries to break their family apart, Rena takes it upon herself to solve her problems. Keiichi and the rest of the club do their best to help Rena with the aftermath, and things start spiraling out of control when Rena uncovers a conspiracy.

Tsumihoroboshi was first released at Comiket 68 on August 14, 2005.

This arc was rereleased with Minagoroshi at Comiket 69 on December 30, 2005.

MangaGamer translated Tsumihoroboshi into English and released it on April 15, 2010. Changes include:

MangaGamer retranslated this arc and released it individually on June 14, 2018. Changes include:

Choices are added near the end of the arc that lead to 2 alternate endings. The player is forced to see one of these endings and unlock the extra arc Yoigoshi-hen before being able to get the "true" ending.

The manga adaptation of Tsumihoroboshi was illustrated by Karin Suzuragi and serialized in Square Enix's Gangan Powered magazine from August 2006 to June 2008. It was later collected into four volumes. Yen Press published them in English under the title "Atonement Arc".

The 2006 Higurashi When They Cry anime by Studio DEEN adapted Tsumihoroboshi in Episodes 22 to 26 as the last arc of the season.

The 2007 anime premiered with Reunion, an adaptation of a TIP and an epilogue to the Tsumihoroboshi arc proper, on July 6, 2007. The said episode is followed by Yakusamashi, an arc exclusive to the anime season.

Tsumihoroboshi was adapted as a single set and released on February 22, 2008. 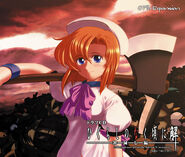 The Japanese movie Higurashi no Naku Koro ni Chikai adapts Tsumihoroboshi as a sequel to the 2008 live-action movie and released on April 18, 2009. The film was released overseas with the title Shrill Cries - Reshuffle. 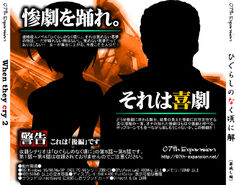