Tatarigoroshi-hen (祟殺し編, lit. Curse Killing Chapter) is the third chapter of Higurashi no Naku Koro ni Question Arcs and by extension the series. It was released at Comiket 64 on August 15, 2003 and followed by Himatsubushi-hen.

Man, curse. or coincidence?
How are the conjectures inside you solidifying?
I look forward to whether those conjectures will waver or become a cornerstone in this scenario.

The difficulty Is the worst. You will probably not even be able to make conjectures.

After a failed attempt to make dinner, Keiichi Maebara gets help from Satoko Houjou and begins bonding with her in a brother-sister relationship. After Satoko's abusive uncle returns to Hinamizawa, Keiichi becomes determined to protect Satoko at any cost and soon makes a harrowing decision. 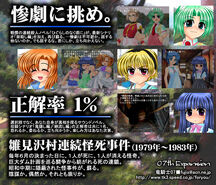 Retrieved from "https://07th-expansion.fandom.com/wiki/Tatarigoroshi-hen?oldid=71328"
Community content is available under CC-BY-SA unless otherwise noted.