Because Baibao Squad is deified in the COU for propaganda purposes, Suparna Squad is often relegated into obscurity. However, they're more than strong enough to serve as Baibao's other half, so they were unsurprisingly selected as contestants for the International Battle Standard Festival.
Their kette is composed of one Responder, one Defender, and one Fire Support. They're the exact opposite of Baibao Squad, focusing mainly on fights that aren't against Aerial Augmented Infantry units.

Typically, they attack from a safe distance using Andry's long-range missiles, while Sujatha and Rukhshana defend him.
However, the squad's leader, Sujatha, thinks this sort of tactics, designed for missile-equipped aircraft, comes from outdated air force thinking, and that it won't work in the current age where midair close-range fighting exists. So, she is apparently always petitioning her superiors to let them use a more modern structure and tactics, but due to their lack of understanding, she's made little progress.

Suparna is formally introduced in Chapter 2 at the International Battle Standard Festival. They later take the Public Bath Oath.

In Chapter 18, Suparna is sent to destroy ABN agricultural plants, however they inadvertently cause civilian casualties. This is followed up in Chapter 24 with Suparna being reprimanded not only for their neglect, but in their sabotage of missions by turning off aim guidance, something Suparna did as part of the Order of the Public Bath's goals. Their punishment is brushed off once Andry defends Rukhshana and a colonel understands that Suparna is one of their top kettes.

The tab of Suparna on the official site.

Image taken from the Pre-release trailer.

Image taken from the OP. 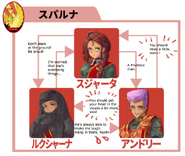