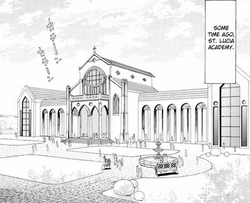 St. Lucia Academy (聖ルチーア学園, Sei Ruchīa Gakuen) is a strict private school featured in both Higurashi When They Cry and Umineko When They Cry. It is not clear if the two locations are the exact same, as both stories feature scenes at St. Lucia in different time periods.

The school is first mentioned in Meakashi as the place Shion Sonozaki studies and lives at for two years before she escapes in 1982.[1] It is a girls-only Christian school that provides education from elementary to college. There are also surveillance cameras and guards posted around the school.

It is further revealed in Higurashi: When They Cry - GOU that students who fall behind in grades are moved to a remedial class until they get their grades back up and students who get into trouble are sent into individual study rooms similar to jail cells. According to Ryukishi07, St. Lucia Academy has "one section where girls can enroll by paying large sums of money, and another section where 'normal' girls can attend if they happen to have excellent grades"; Shion attended the former where she didn't have to study too much, while Rika and Satoko attended the latter.[2]

The school is featured in Alliance of the Golden Witch as the place Ange Ushiromiya attends for several years until 1998.