Satoko's daughter. Her family name changed from Houjou to Kimiyoshi when Satoko married. Sakiko is one year older than Keitarou.

Sakiko has short blond hair tied into a ponytail. For her school uniform she wears a sailor shirt, skirt, and shoes.

Sakiko is the daughter of Satoko Houjou and Kisaku Kimiyoshi. Her mother owns a souvenir shop, which Sakiko works at sometimes. Sakiko attends middle school in Okinomiya with her friends and is in a games club with them.

Sakiko is mischievous and vulgar. She likes to take advantage of Tamaki's gullibility to make her do ridiculous, innappropriate things. At work she will put on a facade and pretend to be a proper lady. Sakiko has a reputation of spreading rumors.

Sakiko sometimes says dark and serious things, but is quick to pass them off as jokes when others get concerned.

Sakiko is introduced waiting with Tamaki at their usual spot. When Keitarou and Kihiro show up, Tamaki suddenly gropes Keitarou's crotch, having been convinced by Sakiko that it would be practice for when she gets married. Kihiro punches Sakiko in retaliation. The group goes to school afterwards.(Oniokoshi Chapter 1)

After school, Keitarou says he met a strange girl who wouldn't speak to anyone, and Sakiko and the others tell him about the Polaris cult. The group tries to convince Keitarou not to get involved with Polaris people, with Sakiko especially disliking them and saying that many Hinamizawans don't like them. The group then goes to Smile Shop. At the shop, Keitarou and Kihiro meet Marutake, who Sakiko recognizes as a regular customer.(Oniokoshi Chapter 2)

Keitarou and the club have dessert at Angel Mort a few days later, with Keitarou wanting to pursue friendship with Polaris and asking his friends for ideas. As they eat, Sakiko says Keitarou is working too hard towards it. After eating, they run into some delinquents harassing a girl. Keitarou gets hurt trying to save her, and the rest of the club members help him; Sakiko records a video of the delinquent leader acting up and threatens to post it online. The club sees to the girl's safety and learn she's Inori, the same Polaris girl who Keitarou met earlier. Inori thanks them for their help and then runs off. Another girl that Keitarou met, Kururu, appears and is introduced to the club.(Oniokoshi Chapter 3)

Kururu is inducted into the club, with Sakiko and the others having a picnic with her. Kururu asks about Oyashiro-sama and his curse, and Sakiko ominously mentions that he curses outsiders. She then claims it was a joke, but Kururu seems convinced.(Oniokoshi Chapter 4 Part 1)

Sakiko and Tamaki wait at their usual meeting spot for Keitarou and Kihiro to arrive. Sakiko tricks Tamaki into groping Keitarou's crotch, and Kihiro punches Sakiko in the face as punishment. They then head to school.

After school, the group reunites.(Hoshiwatashi Chapter 1) They tell Keitarou about how Hinamizawa has changed because of Polaris, with Sakiko saying Keitarou will be cursed by Oyashiro-sama if he gets involved with them. Tamaki and Kihiro are disturbed by this comment, and Sakiko says it's just a joke.

The group goes to Smile Shop the next day, where they help Aunt Satoko record a promo video. Keitarou and Kihiro talk outside about how Polaris is disliked by Hinamizawa, with Keitarou saying the Hinamizawan villagers should've known that beforehand. Sakiko suddenly appears and says that the Sonozakis let Polaris in, and that Tamaki is feeling stressed since the Sonozakis are losing influence. Sakiko apologizes for her behavior regarding Polaris earlier and encourages Keitarou to make friends with them.(Hoshiwatashi Chapter 2)

The next day, Keitarou shows the club his plan to befriend Polaris by giving members surveys about Hinamizawa. They then meet Kururu, one of Keitarou's new friends, when they see her defending a Polaris girl.(Hoshiwatashi Chapter 3) 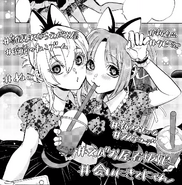