Witch of Pieces/Witch of the Piece (駒の魔女, Koma no Majo)

Piece (ピース) is a character that appears exclusively in Last note of the Golden Witch. She challenges Battler, Beatrice, and Ange to a game where they must determine her identity.

Clad in a little whirlwind, the new Game Master appears before Battler. A piece sent by Featherine Augustus Aurora, she proudly describes herself as an "assassin". With a vulgar laugh, she announces the start of a new game...

Piece has light blue string-like hair, and dons a golden crown with a veil on her head. She has a small red bow tie and a white cravat on her neck. She has an elegant dress that is a shade of blue lighter than her hair.

Piece initially presents herself as polite, but she's prone to short bouts where she puts on a crazed expression and makes a double peace sign. Piece also has a verbal tic of "pi-su".

Having seen her husband, Rudolf Ushiromiya, remarry with his mistress Kyrie Ushiromiya after her death, Asumu harbored feelings of animosity towards Kyrie's daughter, Ange. Piece, as Asumu, blames herself for what happened to Beatrice, Battler, and the rest of the family, stating if she hadn't died when she did she could've been there to help both of them and stopped a lot of suffering from happening. Unfortunately she also acknowledges such a world would require Ange to not be a part of the Ushiromiyas because she'd be an illegitimate child, and apologizes for trying to hurt Ange after getting to know her.

Piece was created by Featherine and sent to challenge Battler's group.

From an anti-fantasy perspective, she is Asumu Ushiromiya. Piece is a manifestation of Asumu's survival creating a butterfly effect and causing several characters to become different than they presently are, thereby "erasing" them from existence.

Piece can extend her hair to unnatural lengths, using this to drown and devour characters and pieces. When Piece devours someone, she completely erases them from existence, making others lose their memories of them. Piece can also take the place of devoured characters and make people think she existed as them all along.

Piece first appears when she calls Battler, Beatrice and Ange to a tea room and challenges them to find out her identity. The gameboard has a similar setup to Twilight of the Golden Witch where a young Ange visits the island, Kinzo is alive and Beato is present as the 19th guest. Piece soon arrives on the island and devours Kyrie, taking her place as "Piece Ushiromiya" and Rudolf's wife. The young Ange is the only one to not recognize Piece at all, and she is soon devoured as well.

Kinzo, Beato's piece and the other servants realize that Piece is an uninvited guest and do battle with her, however they are summarily erased. In the meta-world, Battler, Ange and Beatrice present their theories as to who Piece really is. The Meta-World Ange creates a theory wherein Erika Furudo is the true identity of Piece, however, Beatrice and Battler couldn’t agree with that theory.

After some debate, Battler and Ange determine Piece's true identity: Asumu Ushiromiya. Piece's existence is based on a world where Asumu never died, thus changing the lives of every other family member and servant: Battler and Shannon solve the epitaph with Asumu's help and divide the gold amongst the family, later living happily; Kinzo's death is not covered up; the Rokkenjima mass murders never occur; however, Kyrie never marries Rudolf and Ange never joins the Ushiromiya family, instead becoming Ange Sumadera. Piece's scenario existed to torment Ange with the idea that her existence is actively causing her family pain. Ange begins to think she never would've been born but Piece tells her she has a supportive brother and witch who will accept any Fragment.

Piece resolves to cure everyone's sadness by erasing herself from existence, thus making everyone forget about her. Piece states how happy she is that Ange is alive before disappearing.

In the after-credits scene, Piece pulls several rejected characters out of oblivion and talks about them, including Virgilius. 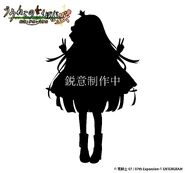