Abducted by Demons Arc (manga)
Spirited Away by the Demon (anime)

Onikakushi (鬼隠し編, Onikakushi-hen, lit. Demoned Away Chapter), also known as the Abducted by Demons Arc in the manga, is the first story arc of the Higurashi When They Cry series. It was first released on August 10, 2002 at Comiket 62. It is the first of four Question Arcs, and is followed by Watanagashi.

Welcome to the world of Higurashi: When They Cry.
The Onikakushi arc will be the opening inviting you into this world.
Don't play tough-please just enjoy life in Hinamizawa to the fullest.

The difficulty is extremely high, but I hope you will enjoy the reward.

In June of 1983, Keiichi Maebara moves to the rural village of Hinamizawa and makes some new friends while learning of the villages' culture and their guardian deity Oyashiro-sama. After hearing that annual deaths and disappearances happen because of "Oyashiro-sama's curse," Keiichi begins to uncover dark secrets about his new friends and his new home.

Onikakushi was rereleased with Watanagashi at Comiket 63 on December 29, 2002. There are some changes made to the arc:

Onikakushi was rereleased with Tatarigoroshi at Comiket 64 on August 15, 2003. The poem that was released with the previous version of the arc was changed to a different one.

MangaGamer retranslated this arc and released it individually on May 15, 2015. Changes include:

A new demo of Onikakushi and Watanagashi was released on July 15, 2020 for free download on 07th Expansion's demo page. Changes include: 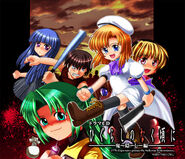 The manga adaptation of Onikakushi was illustrated by Karin Suzuragi and first serialized in Square Enix's Gangan Powered magazine from May 2005 to May 2006. It was later collected into two volumes. Yen Press published them in English under the title "Abducted By Demons Arc".

The entire arc was re-released as a single omnibus volume in Japan on July 9, 2007.

The 2006 Higurashi When They Cry anime by Studio DEEN adapted Onikakushi in the first four episodes.

The original light novel adaptation of Onikakushi consists of two volumes. It was originally published by Kodansha and republished by Seikaisha. It may be also be read for free (in Japanese) on Seikaisha's website.

Novel versions of Onikakushi intended for junior students were published by Futabasha, consisting of two volumes. Both volumes released on October 21, 2020.

These are the credits as seen in the original Comiket release.