The August 2021 issue of Newtype Magazine featured an interview with Ryukishi07 and Satoko's voice actor Mika Kanai, where they offer some insight as to what Higurashi Sotsu will feature.

Partial translations and summaries provided by Naegles, danpmss and Hubris.

Q: How do you feel about seeing the grown-up Satoko and her friends with new character designs?

Ryukishi: Since Satoko is in the spotlight this time, I wanted to find someone who could draw her the cutest way and ask them, so I was introduced to Akio Watanabe.

When it comes to fangs and band-aids, there is no one more fitting for the job than Mr. Watanabe. I was certain that he would be able to draw Satoko in a very cute way.

Kanai: I knew her fang would still be there even when she grows up.

Ryukishi: I think one of the highlights of Sotsu will be the question of whether Satoko will overcome this and come back to the human side or end up in the side of non-humans.

Q: So I'd like to ask you again to tell the fans what the highlights of Sotsu will be.

Ryukishi: I could say we are finally going to start seeing things from the other perspectives of the story, which we haven't seen so far. It's going to tell how things actually happened, so I think the answers to several of the mysteries that were presented in Gou will be revealed. Some of them may be so shocking that they will change the way you see some stories within Gou, but I can't really say anything more than that.

Ryukishi says that Eua is a nasty character that showed up right at the perfect time to offer up a way for Satoko to use up her reckless adolescent energy, which should have normally been used up in a healthy manner, in ways that shouldn't exist in the human world, and, as a result, something awful happened to Satoko.

Ryukishi: But, Eua is not operating behind the scenes. After all, it's a story about Satoko's change of heart after obtaining that power. I'd be glad if both you and Eua would watch over Satoko.

Ryukishi talks about how some fan read something he had written 10+ years ago where Teppei says he wants a kind role in the future. Ryukishi affirms that he always wanted to give every character a chance at redemption no matter what sins they committed. He says it's a theme in the work. He says the idea of giving last boss Takano a redemption, but not Teppei, always bothered him. He says Teppei will have a major part in Sotsu.

The director brought up the part in the last interview about seeing Satoko in a new light. He says that people called him a liar and such. He acknowledges that he was being deceptive and that episode 24 wasn't the "end" he was talking about.

"This time for real, if you watch Sotsu to the end your view will change!" 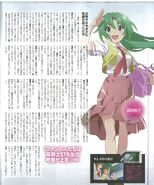