Minagoroshi-hen (皆殺し編, lit. Massacre Chapter) is the third chapter of Higurashi no Naku Koro ni Kai and the seventh in the overall series. It was released at Comiket 69 on December 30, 2005 and followed by Matsuribayashi-hen.

The original release of Minagoroshi-hen includes the previous two chapters.

- Massacre Chapter -
This story introduces the unit inside and out, using all the actors.
This is no longer a story, it's a public autopsy for all to join.
As they say, after loving someone,
cut open their belly and eat their organs.
It's the same with stories.
The difficulty is quite mild. Well suited for those with pride.

Rika Furude has traveled through countless Fragments with the help of Hanyuu in her search for a happy ending. This Fragment looks to be the same as any other until Keiichi succeeds in breaking fate. Renewed with confidence, Rika becomes determined to change her own fate until unforeseen events occur. 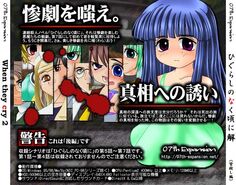 Retrieved from "https://07th-expansion.fandom.com/wiki/Minagoroshi-hen?oldid=71326"
Community content is available under CC-BY-SA unless otherwise noted.