Meakashi (目明し編, Meakashi-hen, lit. Eye Opening Chapter), also known as the Eye Opening Arc in the manga, is the first story arc of Higurashi no Naku Koro ni Kai and the fifth story arc in the overall series. It was released at Comiket 67 on December 30, 2004 and is followed by Tsumihoroboshi.

- Eye Opening Chapter -
Welcome to the world of "Higurashi When They Cry Kai".
We've finally reached the halfway point.
From the viewpoint of the protagonist,
try to find the truth behind the tragedy that unfolds.
The difficulty is very high.
It won't be easy to comprehend the motive of the perpetrator.

After escaping from her boarding school in 1982, Shion Sonozaki hides out in Okinomiya from the rest of the Sonozaki Family and tries to live life as normal. She soon meets Satoshi Houjou and falls in love, and as time passes and Oyashiro-sama's curse claims more victims, Shion struggles to find answers.

This arc was first released in Japanese in CD format at Comiket 67 on December 30, 2004.

This arc was rereleased with Tsumihoroboshi at Comiket 68 on August 14, 2005. The extra arc Batsukoishi-hen that served as an All-Cast Review to Meakashi was removed and replaced with the Staff Room.

This arc was rereleased with Minagoroshi at Comiket 69 on December 30, 2005.

MangaGamer translated Meakashi into English and released it on February 28, 2010. Changes include:

MangaGamer retranslated this arc and released it individually on April 28, 2017. Changes include:

Choices are added near the end of the arc that lead to an alternate ending.

The 2006 Higurashi When They Cry anime by Studio DEEN adapted Meakashi in Episodes 16 to 21.

Notably, this adaptation cuts out the reveal of Mion and Shion having switched places as children.

The manga adaptation of Meakashi was illustrated by Yutori Houjyou and serialized in Square Enix's Gangan Wing magazine from August 2006 to April 2008. It was later collected into four volumes. Yen Press published them in English under the title "Eye Opening Arc".

Notably, this arc follows Yoigoshi according to Square Enix's official reading order.[1] Yen Press followed as such in the global numbering it gave to the volumes. 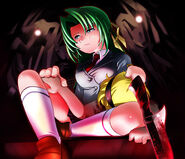