The original release of Matsuribayashi-hen includes the previous 3 chapters. In other words, it is effectively the full Kai release.

Matsuribayashi
~At least let it end with a blissful dream~

- Festival Accompanying Chapter -
The riddle you have been entrusted with solving now finally becomes unraveled.
What must be done to stop the chain?
And what will happen in the ultimate end?
It's a showdown between the conclusion you reached and the one I reached.
There is no difficulty. You should understand that now.

The true culprit's motivations are revealed, and the events leading up to June 1983 are recounted. Rika and Hanyuu bet everything on one final Fragment in an attempt to reach a happy ending for everyone. 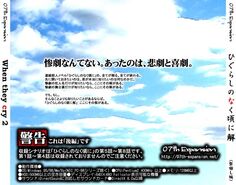 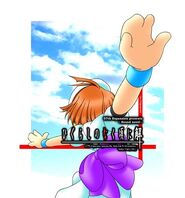 The pre-cropping front cover.
Add a photo to this gallery

Retrieved from "https://07th-expansion.fandom.com/wiki/Matsuribayashi-hen?oldid=71324"
Community content is available under CC-BY-SA unless otherwise noted.