Land of the Golden Witch

There was originally going to be a character named Virgilius, who was supposed to be a guide for the reader and was aggressive. Virgilius's role was instead given to Virgilia, and his personality formed the basis for Erika Furudo. Many of the murder tricks created for Land would later be used in Alliance, End, and Dawn.[2] Ryukishi considered releasing Land as a bonus episode after the completion of Umineko,[3] but this never happened.

Virgilius was later introduced as a character in Last note of the Golden Witch. 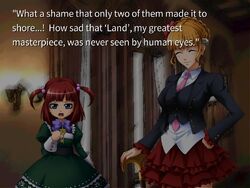 Land is referenced in-universe when Beatrice calls it her masterpiece, one of the many stories she wrote and sealed in a bottle in the style of Agatha Christie. Beatrice couldn't wait until Battler came back to Rokkenjima to make him read her manuscripts, so she thought to write down as many stories she could think of and sent them in the sea hoping that they somehow could reach him.

Land is discussed in the after-credits scene, where Virgilius is summoned by Piece to talk about the concepts planned for it.