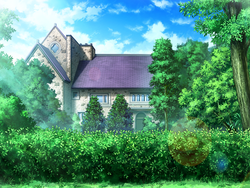 Kuwadorian (九羽鳥庵, lit. "Nine Birds' Retreat") is the hidden mansion on Rokkenjima where Beatrice was held.

It is featured as a stage in Golden Fantasia.

Kuwadorian is a two-story mansion hidden deep in the forests of Rokkenjima. A massive fence surrounds the area. It is inspired by the Nasu Stained Glass Museum in Japan.[1]

In Banquet of the Golden Witch, the existence of a smaller mansion called Kuwadorian on Rokkenjima is revealed. In the year 1967, Kinzo had managed to trap Beatrice in a human body and seal her memories. The human Beatrice lived in Kuwadorian alone. Rosa chanced upon this mansion one day, and invited the human Beatrice out of the mansion to "see the outside world", only to have the human Beatrice fall off a cliff and die. Upon her death, Beatrice regained all her memories and powers. At the end of Banquet, Eva is discovered to have survived The Rokkenjima Mass Murders by hiding out at this mansion.

Requiem of the Golden Witch reveals that the human Beatrice is actually Beatrice Ushiromiya, the daughter of Kinzo and his mistress Beatrice Castiglioni. He built Kuwadorian at the same time he built the main mansion to hide away Beatrice II from the rest of his family. Kuwadorian is connected to an underground tunnel that leads to a room where the gold of the epitaph is stored.

Retrieved from "https://07th-expansion.fandom.com/wiki/Kuwadorian?oldid=84758"
Community content is available under CC-BY-SA unless otherwise noted.