Kitty (キティ) and her friends Tiran (ティラン), Purin (プリン), Kirimichan (きりみちゃん), and Cinnamon (シナモン) are inhabitants from the world of love and dreams who travel to Hinamizawa. They appear in Higurashi no Naku Koro ni Mei in a collaboration event with Sanrio.

Kitty and her friends are described as looking like plush toys. 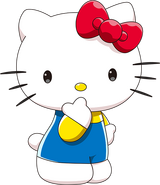 Rena discovers a magic mirror in the junkyard and takes it home, showing it off to Kazuho, Miyuki, Nao, Mion, and Shion. Rena makes a wish to have lots of kyute friends and winds up summoning Kitty, Purin, Cinnamon, and Kirimichan into the house. Rena and Nao are immediately smitten by the visitors' cuteness, much to everyone else's confusion. The group believes Kitty and her friends are stuffed animals that can talk and emote somehow, but Kitty says they aren't toys.

Kitty speaks on behalf of the group and says they are inhabitants of the world of love and dreams. They were playing in their own world when they suddenly ended up in Hinamizawa. Rena and Nao want to play with them but Kitty and the others are worried about their own friends back home and wonder how to get back. The group decides to find out how to undo the wish before doing anything else, and Hanyuu suddenly appears with a shrunken down Rika and Satoko.

The group learns that the mirror is powered by crystals, and there should be extras located in the Furude Shrine's ritual warehouse. Kitty and friends follow the club throughout Hinamizawa and see that other villagers are shrinking to kyute size because of Rena's other wishes. Once they get to the shrine, they find the crystals in the ritual warehouse however a tsukuyami appears and devours the mirror, growing to a bigger size. Kitty gives her support to the club members, and she and her friends transform into outfits for the club members to wear: Kazuho wears Kirimichan, Rena wears Kitty, Mion wears Cinnamon, and Shion wears Purin.

The empowered club members defeat the giant tsukuyami and retrieve the mirror, with Kitty and everyone turning back to normal. Kitty and friends bid farewell, disappearing when Rena wishes for them to go home. Soon after, Keiichi appears holding Tiran and asks the group how he can get him home. Rena and Nao fawn over the tiny T-rex.

An ending note says the tale of Tiran's return to his world may be told in the future.