My father is a painter, and the main reason we moved to Hinamizawa was to set up his studio in a peaceful place away from the city.

My mother is a housewife, but she sometimes goes with my father to Tokyo to help (manage?) with his work.

She is also a good cook and loves mystery novels?

Ichirou and Aiko do not have sprites in any version of the visual novels.

Their appearances in the anime and manga adaptations all greatly differ from each other. 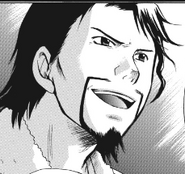 Ichirou in the Higurashi manga.

Ichirou and Aiko are very supportive of Keiichi. Tsumihoroboshi shows that they felt guilty about partially contributing to Keiichi's shooting incident by not being aware of his struggles and tried hard to rectify this mistake.

Keiichi's family used to live in Tokyo. Hoping to start a new life, they moved to Hinamizawa in 1983 after buying an empty lot and building a mansion there. Tsumihoroboshi reveals that they did it after an incident where Keiichi shot at kids with a BB gun.

The credits say that Ichirou and Aiko die on 6/22/1983 in the Great Hinamizawa Disaster.

The credits say that Ichirou and Aiko reside in Tokyo as of 2004, two decades after Keiichi's death from acute heart failure.

The Great Hinamizawa Disaster leaves the fate of Ichirou and Aiko after Rika's death unclear.[1]

In the Fragment named "Preview of lots for sale", which is unlocked after "The fourth sacrifice" and hence implied to take place at some point after the Curse in 1982, Ichirou visits Hinamizawa and encounters Hanyuu and Rika Furude, who convince him to move to the village.

In Nekodamashi, Rika goes through many death loops and encounters a deranged Aiko, who believes Rika kidnapped her family; Ichirou and Keiichi are shown dead next to her.

In 2019, an elderly Ichirou and Aiko are still living in Hinamizawa with Keiichi, his wife, and their son Keitarou.

"...It's just like the words of the main character's mother in a novel I read recently, called 'Higurashi No Naku Koro Ni'. Every story needs to have a beginning, a middle, and an end. Eliminating that 'beginning' is essential for the perfect crime."
— Battler Ushiromiya's inner monologue in Legend of the Golden Witch