Hinamizawa Bus Stop (雛見沢停留所, Hinamizawa Teiryūjo) is the prototype version of Higurashi When They Cry. It has had many official releases in various formats.

Per site rules, this page considers the visual novel adaptation introduced in Higurashi no Naku Koro ni Hou as the primary source.

Hinamizawa Bus Stop was first written in approximately 2000.[1] It was one of many stage plays Ryukishi07 wrote and submitted to a theater company, but it was rejected. Only two copies of the original script existed: one sent to the company and another given to a theater friend.[2] The story was about an hour long and horror-focused; it centered around two characters, Rika Furude and Mion Sonozaki, that hung out at a bus stop in the rain.

When Ryukishi's brother Yatazakura gave him the idea to make a novel game, Ryukishi took the original Hinamizawa Bus Stop script and made many changes into the Higurashi story known today, with one of the most notable differences being Rika becoming younger than her prototype version and Mion becoming older.[3]

Hinamizawa Bus Stop was released as a one-shot manga on December 22, 2012. A visual novel version was later released as part of Higurashi no Naku Koro ni Hou. People who bought copies of Hou on the website Toranoana could get a physical copy of the original, unmodified Hinamizawa Bus Stop script.[4] The theater group Shingidan would also produce and perform a stage play version.

Two students living in Hinamizawa, Rika Furude and Mion Sonozaki, rest at a bus stop during a rainy day and wait for the bus to arrive. Some employees soon join them, who are working on a project that will build a dam in Hinamizawa but result in the village's destruction. As the group makes their acquaintances, they talk about a phenomenon related to the strange deaths of dam project employees, the "curse of Oyashiro-sama." 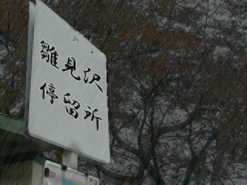 The title screen on the PC version.