Himatsubushi (暇潰し編, Himatsubushi-hen, lit. Time Wasting Chapter), also known as the Time Killing Arc in the manga, is the fourth story arc of the Higurashi When They Cry series and the fourth and final chapter in the Question Arcs. It was released at Comiket 66 on August 13, 2004 and is followed by Meakashi, the first chapter of Higurashi no Naku Koro ni Kai.

The original visual novel release of Himatsubushi includes the previous three story arcs, effectively acting as a full collection of the Question Arcs. This was also the case with the older MangaGamer release of Higurashi. The current rereleased version by MangaGamer splits each Question Arc into a separate release.

Himatsubushi
~For You, the Final Mystery~


I now entrust you with all the mysteries hidden within Higurashi: When They Cry.
However comical it may be, if you have reached any conjecture, then you have passed.
This final novel is a meager reward for you.

Conjecture is impossible. You have the right to reject this story.

In 1978, the village of Hinamizawa fiercely protests the government's plan to build a dam and destroy their home. When the Minister of Construction's son is kidnapped, the policeman Mamoru Akasaka visits Hinamizawa undercover to investigate the villagers' supposed involvement. He soon meets a young girl Rika Furude, who gives Akasaka an eerie warning: "Go back to Tokyo."

Himatsubushi was released in physical format at Comiket 66 on August 13, 2004 in Japanese and published by 07th Expansion.

MangaGamer retranslated this arc and released it individually on October 7, 2016. Changes include:

Himatsubushi has been included in Matsuri, Kizuna Volume II, Sui, and the console version of Hou.

Ports add a choice near the end that leads to a bad ending, and an additional scene at the very end that introduces Akasaka's daughter Miyuki. There is also a slight change in the beginning of the arc that inserts mention of Kakiuchi City.

The manga adaptation of Himatsubushi was illustrated by Yoshiki Tonogai and serialized in Square Enix's Monthly Shōnen Gangan magazine from February to November 2006. It was later collected into two volumes. Yen Press published them in English under the title "Time Killing Arc".

Notably, this arc is followed by Yoigoshi according to Square Enix's official reading order.[1] Yen Press followed as such in the global numbering it gave to the volumes.
The entire arc was re-released as a single omnibus volume in Japan on April 17, 2009.

The 2006 Higurashi When They Cry anime by Studio DEEN adapted Himatsubushi in Episodes 14 to 15. 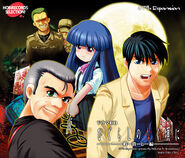 Kodansha released one volume adapting Himatsubushi. It first released on February 5, 2008 and was republished on July 8, 2011.

Novel versions of Himatsubushi intended for junior students were published by Futabasha, consisting of two volumes. Both volumes released on July 30, 2021. 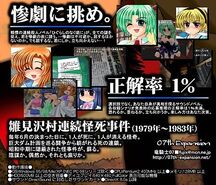