Higurashi no Naku Koro ni Sui (ひぐらしのなく頃に粋, lit. When the Cicadas Cry Essence) is a port of Higurashi When They Cry on PlayStation 3 and PlayStation Vita by Kaga Create, featuring new character and background art and CGs. It released on March 12, 2015.

Sui contains all arcs from Matsuri and Kizuna. New content includes an adaptation of Hajisarashi, which was originally released as a booklet with the first-run limited edition of Matsuri.

In anticipation of the game's release, a campaign was held by Kaga Create where videos showcasing each story arc were uploaded to their Youtube channel and taken down after some time. Each video ended with a different Japanese character, with players encouraged to combine the characters seen in other videos to figure out the full message and reply to the Higurashi Sui Twitter account. After 19 total videos (the same number of arcs in Sui), the complete message was revealed to be "Who has longer hair, Rika Furude or Satoko Houjou?" (古手梨花と北条沙都子はどちらの髪が長い) Winners received a letter and autographs from Ayane and Kanako Ito, the singers for several Higurashi console openings.[1]

Sui keeps the format of Kizuna overall. The arcs are divided into four groups based on the four installments of Kizuna with an additional new extra arc Hajisarashi.

Scenario 1: This group includes all arcs from Kizuna Volume I and the two arcs previously exclusive to Matsuri. Similar to Matsuri and Kizuna Volume I, the group starts with a common route that can lead to all arcs other than Someutsushi depending on the player's choices.

Scenario 2: This group includes all arcs from Kizuna Volume II. The version of Hirukowashi included is the same as the Alternative Hirukowashi in Kizuna.

Scenario 3: This group includes all arcs from Kizuna Volume III.

Scenario 4: This group includes all arcs from Kizuna Volume IV. Similar to Kizuna Volume IV, the group starts with Connecting Fragments that can lead to each of the arcs. The version of Miotsukushi included in Kizuna was split into two different arcs: Miotsukushi-hen Omote is similar to the arc's original release in Matsuri, but with some changes made to it; Miotsukushi-hen Ura consists of the extra chapters added to the Kizuna version that served as the conclusion to the Advanced Story. Despite being listed separately on the Scenario screen, both arcs are apparently treated as one single arc given that Sui is advertised as having 19 arcs.[2]

Hajisarashi-hen is an extra arc adapted from a story included in a special edition of Matsuri where the main cast has fun at a pool.

Various arcs feature choices that determine how the story will go, with various bad endings included. There is also a minigame added called "Quiz Oyashiro Shock" where the player can answer trivia questions about the series and unlock art galleries and new arcs early. 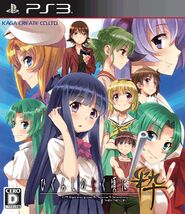 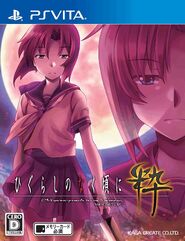