Higurashi no Naku Koro ni Rei (ひぐらしのなく頃に礼, lit. When the Cicadas Cry Gratitude) is a collection of 3 extra arcs of the Higurashi When They Cry series. It is officially subtitled When they cry 2+.

The arcs has been released in English by MangaGamer under the title Higurashi When They Cry Hou - Rei.

An epilogue to Matsuribayashi. Rika wakes up in a strange world different from the one she knows and as she explores is faced with the choice of staying there or returning to her old one.

An extra arc not considered to take place within the main story. An ancient artifact in the Furude Shrine bestows love upon whoever holds it, with chaos ensuing as it changes hands.

An extra arc that originally served as the All-Cast Review for Meakashi.

Rei was rereleased with Higurashi no Naku Koro ni Hou on August 17, 2014.

MangaGamer translated the entirety of Rei and will release it on June 2, 2022. Changes include:

A namesake OVA series was released in 2009 as a direct sequel to the Kai anime. It adapts Saikoroshi, Hirukowashi, and a story from a booklet; Batsukoishi-hen is omitted but later included in Higurashi no Naku Koro ni Kira. 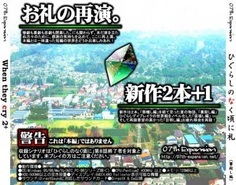 The back cover. Noticeably, "Saikoroshi-hen" is written where the name of the chapter is written on Kai covers, implying Saikoroshi is the main chapter of this release. 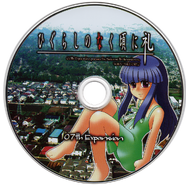