Higurashi no Naku Koro ni Matsuri (ひぐらしのなく頃に祭, lit. When the Cicadas Cry Festival) is a remake of Higurashi When They Cry on PlayStation 2 by Alchemist, released on February 22, 2007. It features voice acting, new character art by rato, and new backgrounds by Media.Vision.[1] Matsuri includes the first seven arcs of the original series and 3 new arcs including an alternative ending to the main story, Miotsukushi.

An updated version named Higurashi no Naku Koro ni Matsuri: Kakera Asobi (ひぐらしのなく頃に祭 カケラ遊び, lit. When the Cicadas Cry Festival: Fragment Toying) was released on December 20, 2007 as both a standalone full version and as an append version for the original Matsuri. Kakera Asobi includes some content from Matsuribayashi, an improved flowchart and full voice acting for scenes that were previously unvoiced.

Development for Matsuri began as early as 2005, shortly after the release of Meakashi, when Kiichi Kanou was hired to create a remake of Higurashi for home consoles. It actually began development in February 2006, when rato was brought on to create new artwork for the characters. Ryukishi07, Kanou, and rato would have weekly meetings at the Alchemist office. Several of the new content introduced in Matsuri like new artwork and addition of choices were suggested by Ryukishi. The game had the working subtitle of "Kizuna" (絆, Bonds). It was changed to "Matsuri" since Kanou envisioned themes of a discussion with gods. "Kizuna" would later be used for the subsequent series of Higurashi ports on Nintendo DS.

The new story arcs, Taraimawashi, Tsukiotoshi, and Miotsukushi, were presented by Kanou. He wrote most if not all of Miotsukushi while he simply wrote the outline for the other two arcs and had others write them. Kanou also received some data regarding Matsuribayashi from Ryukishi as he was writing it and incorporated some concepts from it into Miotsukushi. Matsuribayashi and Miotsukushi were intended to both end with a happy ending, but by following different perspectives.

Supporting characters like Kiichirou Kimiyoshi and Katsuya Kumagai received sprites for the first time. It was planned for other characters like Oryou, Kameda, Okamura, and Keiichi's father to get sprites, however there was no time.[2]

Taraimawashi is an alternate arc meant to represent a "bad ending".

Tsukiotoshi-hen is an alternate version of Tatarigoroshi where Keiichi, Shion, and Rena team up to save Satoko from her uncle.

Miotsukushi-hen serves as an alternate conclusion to the series, as Matsuribayashi is not included.

Matsuri uses a route and flowchart system, where different choices determine what arc or ending the player ends up on. Before starting a game, players can choose different protagonists, which lets them read the arcs taking place from their perspective. Keiichi is the only protagonist the player can choose at the start, with more protagonists unlocked as different arcs are cleared.

Keiichi's route is a common route that can lead into Onikakushi, Watanagashi, Tatarigoroshi, Taraimawashi, Tsukiotoshi, or Tsumihoroboshi depending on the choices. However, the player can only enter Onikakushi or Taraimawashi at the start. The choice that leads to Watanagashi requires completing another arc at least once to be unlocked. Clearing Onikakushi will unlock the choice required to enter Tatarigoroshi while completing Taraimawashi will unlock Akasaka as a protagonist, allowing the player to enter Himatsubushi.

After clearing Tsumihoroboshi, Rika will be unlocked as a protagonist, allowing access to Minagoroshi. Clearing this arc will unlock Keiichi and Rika together on the protagonist selection screen, leading into the final arc Miotsukushi.

See the following pages for the CGs added for their respective arcs.

Those that pre-ordered Matsuri received a pen in the shape of Satoshi's bat and an inflatable Rena balloon.

The limited edition bonus came with a postcard set, a booklet with the extra arc Hajisarashi, and a 2-disc soundtrack. 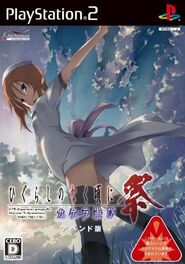