When They Cry: Higurashi no Naku Koro ni

why, or why not

Higurashi When They Cry Kai

Higurashi no Naku Koro ni (ひぐらしのなく頃に, lit. When the Cicadas Cry) is an anime adaptation of the visual novel series of the same name by Studio DEEN. The anime was aired in Japan from April 4 to September 26, 2006. It adapts the contents of the four Question Arcs along with the first two Answer Arcs, and is followed by Higurashi When They Cry Kai.

The anime was licensed by Geneon Entertainment under the English title When They Cry: Higurashi no Naku Koro ni in 2007.[1] The license is currently held by Sentai Filmworks along with Kai and Rei since 2015.[2]

Transfer student Maebara Keiichi enjoys carefree days of playing with his friends in the sleepy town of Hinamizawa. However, one fateful day, Keiichi hears news about a local murder, triggering a set of horrific events. His friends Rena, Mion, Satoko, and Rika, as well as the other residents of Hinamizawa, hide a dark secret, and Keiichi is sinking right into it.[3]

People who ordered all nine DVD box sets had a chance to acquire the OVA Nekogoroshi-hen. It was included as a bonus episode of the series in the Blu-ray box set released in 2014.[4]

According to someanithing.com. the anime made 359.8 million yen (US equivalent: approx. $3,100,000, taking into account 2006 conversion rates) from DVD and Blu-Ray sales on its first release.[5] 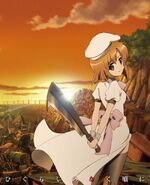