The original Comiket releases of each arc in the Higurashi no Naku Koro ni Question Arcs contained minigames created by BT. Each minigame is unlocked after completing their respective chapters and is accessed through the Omake option on the title screen. Each minigame has different difficulty levels and a "story mode" that explains what the game is about, with most games featuring an overarching story that has not been concluded.

The minigames were removed from MangaGamer's original 2009 English release of the Question Arcs due to technical and copyright concerns.[1] The minigames would disappear entirely from future releases starting with Higurashi no Naku Koro ni Hou.

Rena has a habit of hitting Mion whenever she teases her, and ever since Keiichi arrived, Rena's punches have gotten stronger. After seeing Mion get knocked down again, Keiichi swears to get revenge by training and learning to fight Rena's punches. The Soul Brothers Tommy and Kuraudo soon arrive and assist Keiichi with his training, making him fight a virtual Rena in a simulation that moves faster and hits harder as time goes on.

After clearing Level 3 and receiving the gift of Extreme Mode, Keiichi officially joins the Soul Brothers and christens himself "K".

Rena will punch at the player from either the left or right side of the screen. To dodge the punch, left-click when her fist is on the left side and right-click when it's on the right. In the online version, the player must instead left-click the side of the screen that Rena's fist is approaching in. Clicking at the wrong time will cause a game-over. Sometimes Rena will throw feints, so don't click unless her fist is up close. The player must dodge 100 punches to win.

At Level 3, Rena will use special attacks titled the Rena Fantasy Impact: a close-range high-speed punch that appears as a flash of light on the left or right-side of the screen. Rena does not use feints with this move.

Extreme Mode is where the game will continue endlessly until the player messes up. Rena's speed may also be adjusted by the player to make her faster or slower.
Sphie Bomber (スフィーDEボンバー, Sufī DE Bonbā) was first released with Watanagashi.

Rena goes to help Satoko at Angel Mort and tries to stop a pink-haired girl named Sphie from stealing all of the food.

Sphies will appear all over the screen and disappear after a few seconds. Mousing over a fully-formed Sphie will lock-on to them, at which point left-clicking will shoot and destroy them. Satokos will also appear on-screen and cause an error noise if they are clicked on. The player also has three Renatic bombs that will destroy everything on-screen when right-click is pressed.

Once enough Sphies are destroyed, a big one will appear on screen and the player must click rapidly to get rid of her. Renatic bombs can be used to deal lots of damage.

The player has 90 seconds to clear the entire minigame or else they will lose.

K reunites with the Soul Brothers Tommy and Kuraudo and learns some juicy information: Rena has begun working at Angel Mort and is wearing the waitress uniform, meaning this is their chance to take some pictures. K is given Tommy's camera with the aim of taking as many photos of Rena as possible.

Rena realizes she's being snooped on and attempts to steal K's camera, launching a barrage of punches his way. K manages to escape with the camera thanks to his Renapan training and returns to the Soul Brothers with their prize. Tommy allows him to keep the camera as a sign that he is now a true man.

Gameplay is very similar to Sphie Bomber, with photos of Rena appearing all over the screen and disappearing after a few seconds. Mousing over the photos and seeing the "Chance" prompt will allow you to snap pictures of them. As you collect pictures, a full photo of Rena in the background will begin filling up. with the goal of snapping as many pictures as possible to complete Rena and move on. Satoko pictures will also pop up, and if you snap them then you will lose time. The player also has 3 bombs that can summon Tommy and Kuraudo to snap all of the pictures on the screen. The player has 90 seconds to complete the Rena picture or else you lose.

After completing the Rena picture, Rena herself will begin attacking you with her fists filling the screen. To dodge her punches, left-click on an area of the screen where her fists aren't present. If there is nowhere to click then right-click to defend. As you get hit, you will lose health and if it drops to 0 you lose. You regain health over time however. If you can survive for 90 seconds then you win.
Satoko Bomber (沙都子DEボンバー, Satoko DE Bonbā) is a similar minigame to Sphie Bomber. Satokos will materialize on-screen, with the goal to "take home" as many as possible within 60 seconds. Once the timer ends the player's score is determined by the number of Satokos they collected minus the number that escaped.
Devi-Devi-Devils (でびでびでびるず, Debi-Debi-Debiruzu) was first released with Tatarigoroshi.

Rena goes to assist Satoko and Rika at Angel Mort once more but this time the Devi-Devi-Devils, led by Devilotte and her army of Frosts, are appearing to freeze the restaurant solid.

After clearing the game, Devilotte's defeat is reported by Mayu to her comrade Ayu. Ayu declares that Angel Mort will submit to Sky Temple and tells Mayu to assemble their Temple Knights.

The game is a Breakout-style game where players bounce a ball to hit and destroy the Frosts advancing from the right side of the screen. The paddles are Rena and Rika, with left-clicking moving Rena up and Rika down. Satoko balls are bounced around to hit the Frosts. The Frosts will advance every other time the ball bounces off the top or bottom of the screen. If a Satoko ball goes offscreen on the left you will lose it. The game ends when you lose all of your Satoko balls or if the Frosts reach the other side of the screen.

Right-clicking when the ball hits either Rika or Rena will do a special attack: Rena will launch the ball very fast and instantly destroy a Frost on the frontmost column while Rika will fire a laser that destroys an entire row. If Rena or Rika overlap then Rena's attack takes priority. You will lose a Satoko ball when you use a special attack however. If you lose a Satoko ball and left-click once another one appears, you will gain an extra Satoko ball but the Frosts will automatically move forward one space.

After destroying the wave of Frosts, a boss fight will ensue against Devilotte. She will create a wall of Frosts to protect her and if she is hit, she will make the remaining Frosts fire a laser that will freeze the paddles for a few seconds if they hit. After that, the Frost wall will respawn. Frozen paddles cannot move nor will they reflect the ball if it hits them; the ball will pass right through them. 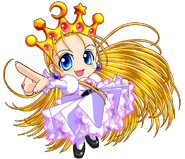 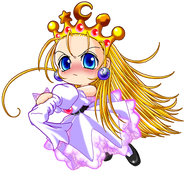 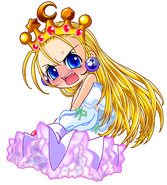 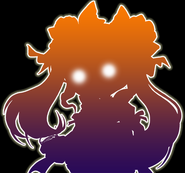 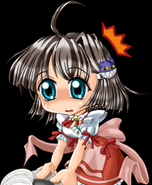 Mayu
Add a photo to this gallery

A similar game to DDD that unlocks after clearing the hardest difficulty.

K runs into Rena and learns that at Angel Mort, Shion has captured Rika and Satoko, demanding that those with small breasts obey the ones with large breasts. K teams up with fellow Soul Brothers Tommy and Kuraudo to end her reign of terror.

Shion attempts to seduce K with his love of big breasts and offers him to join her; if the player says "Yes" then the story ends. Otherwise K, Tommy and Kuraudo begin their attack.

Shion shields herself with several creatures called mukkurus, and the Soul Brothers are unable to best her. Just then, Soul Brother Iri enters the fray and gives some advice: hitting a ball into Shion and making her chest bounce will surely defeat her.

The Soul Brothers finally defeat Shion and she confesses that she took over Angel Mort because someone else ordered her to. As the group wonders who she's referring to, a shadowy figure implied to be Takano gloats.

The gameplay is very similar to DDD except that Tomitake and Ooishi are the paddles, with Ooishi moving up and Tomitake moving down when left-click is pressed. The Frosts are replaced with mukkurus; hitting Shion will make her launch any mukkurus still alive and stun the paddles if they hit. The mukkuru wall will respawn afterwards.

The player is unable to use regular special attacks or create new K balls unlike DDD but instead can "Set" a target by left clicking once the ball hits Shion. Right-clicking when the ball hits the paddles afterwards will launch a special attack that makes Shion's chest bounce, with the bounce level determined by the distance between the target and the paddles.

If the player loses all of their K-balls then it's game over.

The cat Rika who lives at Furude Shrine goes out for a walk in Hinamizawa. While out and about, Rena appears and attempts to take her home. Rika escapes Rena's clutches and into the Irie Clinic, where Soul Brother Iri attempts to capture her and turn her into a pet.

Rika escapes the clinic and follows a sweet aroma to Angel Mort. There, Soul Brother Tommy becomes enamored with Rika and attempts to take a lot of pictures of her, but Iri won't allow him to. The two men compete to capture Rika and though she escapes the restaurant they are still in pursuit. The third Soul Brother Kuraudo sees them and joins the two men in capturing Rika, wanting her and the Soul Brothers to play mahjong together.

The Soul Brothers corner Rika, but they get crushed by a fist belonging to a massive Rena. After evading her, Rika's master Satoko arrives to save her but she gets dragged away by the giant Rena. Rika is pleased with the results anyway.

At times there will be Danger sections where a character will attempt to capture Rika, and the player must avoid them either by continuing to move forward or by dodging them through moving left or right. Other segments require the player to move in time to arrows appearing on-screen, with an added ability to move downwards by pressing spacebar. Game over results if Rika is caught or she goes completely offscreen before the segment ends.

Retrieved from "https://07th-expansion.fandom.com/wiki/Higurashi_Minigames?oldid=90863"
Community content is available under CC-BY-SA unless otherwise noted.