Grave Mole, officially designated the 100th Aerial Augmented Infantry Experimental Squad, is a squad that belongs to the AOU.

An experimental squad attached to a military research center. It was entered into the International Battle Standard Festival as the result of a political decision, for the purpose of collecting research data.
Their kette is composed of two Defenders and one Sniper, making for an extremely defensive pattern.
Chloe manages all the autonomous weaponry used for establishing a position, Lilja controls the skies with a swarm of air defense drones, and Koshka focuses on intercepting attacks as a sniper. This fighting style is ideally suited for one of the Battle Standard Festival's events, Tower Defense, and they are expected to medal there.

It's presumed that, for the sake of maintaining a healthy military balance, the International Peace Mediation Association will shift the world's military might to a defensive focus, and this style was seemingly formed with that in mind.
After hearing this, they may sound like camping snipers, but they actually love air wars and jumbled battles, so they seem to be aiming for the ridiculous new genre of run-and-gun snipers.

Grave Mole is formally introduced in Chapter 2 at the International Battle Standard Festival.

In Chapter 15, they join the Order of the Public Bath.

In Chapter 17, Grave Mole enters combat with COU forces above the Amur River.

In Chapter 24, Grave Mole is joined by several trainee Gauntlet Knights for the final battle before the second global truce.

The tab of Grave Mole on the official site.

Image of Grave Mole from the Pre-release trailer.

Image of Grave Mole from the OP. 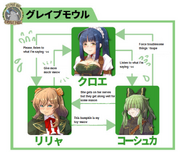