Golden Fantasia (黄金夢想曲, Ougon Musou Kyoku) is a fighting game spin-off of the Umineko When They Cry series. It was published by 07th Expansion and released on December 31st, 2010 for 3,000 yen (approx. $35) at C79 for the PC.

The game was ported to the Xbox 360 by Alchemist under the title Ougon Musou Kyoku X and released on October 6, 2011.

An expansion for PC was released on December 31, 2011, titled Ougon Musou Kyoku CROSS.

An official English translation by MangaGamer was released on December 8, 2017, which included the CROSS expansion.

A download code for CROSS will be included with first print copies of Symphony of Catbox and Dreams.

The tag-team fighting game based on the original "Umineko When They Cry" series, finally released on Steam, in English and with improved rollback netplay!

George, Jessica, and Rosa from the Ushiromiya family join the fray, as this release of Golden Fantasia includes the Cross Expansion from the original Japanese version! All the lines used during combat, story mode, as well match opening and closings are fully voiced in Japanese to bring realism to your combat!

In Golden Fantasia, matches are tag-team fights between two pairs of characters from the Umineko series, each sharing HP building SP for each other through a unique mechanic - the touch system!

During combat players can consume their SP Gauge and initiate their Meta World, but only if your opponent chooses to or otherwise cannot argue their truth and cancel yours!

The 1st Movement is beginning!

Ryukishi07 began development on Golden Fantasia around the time Banquet of the Golden Witch released, wanting to do it because "I simply wanted to play a fighting game of Umineko." The characters included in the first version of the game were those who had fight scenes in the original story and were popular. Later expansions added characters based on popularity polls.[2]

Before the first expansion for Golden Fantasia was released, an event was held where fans could post fanart on the website pixiv and get it added to the game.

Golden Fantasia consists of a 2D fighting style with sprites used for the characters. Players select two characters; the active character known as the Attacker and the inactive character known as the Reserve; and fight other pairs in matches. Gameplay involves the use of the Meta-World, enabling the use of super moves and activating passive abilities. Players are thus encouraged to switch between characters to make use of their abilities and to perform combos.

The player also has the option of playing Normal Mode or Princess Mode: Normal Mode is the standard control scheme while Princess Mode omits some moves but makes button inputs easier to do.

A short manga based off of the game illustrated by Junka Morozumi began serialization in the December 2011 issue of Kadokawa Shoten's Comp Ace magazine. 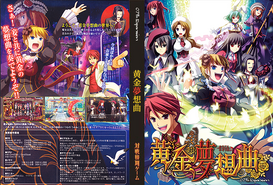 The full cover of the original game.