Frustration (フラストレーション・Furasutorēshon) is the opening for the new Higurashi no Naku Koro ni Mei game for iOS and Android. It was performed by Ayane; who also performed many of the console opening songs beginning with Nageki no Mori and the latest 2020 anime adaptation ending; Kamisama no Syndrome.

The song was written and composed by the famous anime producer/lyricist and composer Chiyomaru Shikura. A single containing the full version was released on 4th November, 2020. The song was first heard in the PV for Higurashi no Naku Koro ni Mei; and can be heard playing in the title screen of the game. 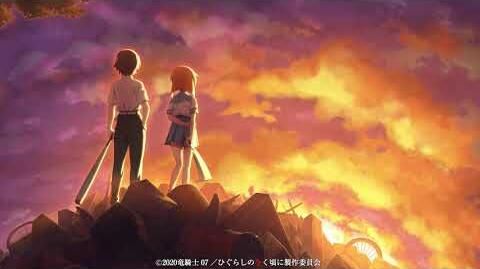 Retrieved from "https://07th-expansion.fandom.com/wiki/Frustration_(Song)?oldid=89189"
Community content is available under CC-BY-SA unless otherwise noted.