Frederica Bernkastel (フレデリカ・ベルンカステル, Furederika Berunkasuteru) is the writer of poems that appear throughout the chapters of Higurashi When They Cry. She is a version of Rika Furude that resides in the Sea of Fragments.

Frederica is not given an appearance in the original visual novels. When she appears in the secret ending of Matsuribayashi, she is assumed to look like an adult version of Rika, which is carried across in various adaptations.

The manga version of Minagoroshi features her as looking the exact same as Rika with her dress, but with an empty look in her eyes obscured by her hair.

Frederica is inferred to be the persona of Rika Furude who has aged mentally. She exhibits many psychological characteristics that are abnormal for a child of Rika's age,which she personally admits.

In emphasis, her speech pattern is different from that of Rika, which is more apparent in the original Japanese releases. For example, Frederica uses the pronoun "watashi" (私), a standard pronoun used by adults and young people who want to be taken seriously in social situations. Whereas, Rika uses "boku" (僕), which is a misuse of the pronoun and is a common behavior seen in young children of Rika's age who want to assert their individuality (see "bokukko"). Frederica speaks in a very mature tone using informal speech (口語, kougo), without any honorifics or the sort.

Frederica is rude, sardonic, and possesses a unique worldview after having lived over a hundred years and observing humans from a distance. She is cynical, melancholy and apathetic which is reflected in her poems. She doesn't mince words and is brutally straightforward to both herself and those around her. Even though she may arguably be Rika Furude, she is also not, and this dissociation from her human counterpart is what defines her existence.

In the Minagoroshi prologue, Frederica refers to herself as one of many Rika Furudes and says she was created when Rika lost interest in breaking her fate[1]. She makes her first physical appearance in the Minagoroshi manga, seeming identical to Rika Furude. She explains her existence to a bewildered Rika who has just emerged from the world of Tsumihoroboshi and awakened in the Sea of Fragments. Minagoroshi also features Rika reciting a poem[2] to Keiichi Maebara and asks him what he thinks of it. This very poem is later retold by Frederica in Matsuribayashi.

Interviews with Ryukishi07 add that Frederica is meant to be the amalgamation of every Rika that had died in her 100-year journey, comprising of all of her memories and negative emotions.[3]

"I cannot go on living without wine. Isn't that the same as saying that I'm not actually alive, but that I'm merely the wine itself? In other words, I'm not Rika Furude,... this wine is who I am. Glancing at the brand name on the side of the bottle which I can't pronounce well, I think to myself that this is "me".

My name is Rika Furude..., No that's not it..., I'm Bernkastel.
Furuderika・Bernkastel. ...Ah, what a slapdash name. Ahahaha."
— An inebriated Rika Furude pondering her 100 year old existence in Saikoroshi

Saikoroshi is perhaps the arc where Frederica truly separates herself from Rika. In Saikoroshi, Rika is sent to a new Hinamizawa in a twist of fate, where everything and everyone are different. As a result of certain aberrations, life in this world will continue peacefully. There is no one who would kill Rika and her parents along with everyone who were supposed to have died unfortunate deaths are alive and well. Those who faced misfortune and those who were affected by the Hinamizawa Syndrome were spared from those circumstances. As a result, many people exhibit personality traits which are different from what Rika knows of them.

Rika wonders about how the Rika Furude from this "perfect" world was truly a different person who may have lived a happy life if "she" hadn't come along. Consequently, she becomes much more aware of how desensitized she has become after her journey across the Fragments. She also begins to realize that throughout the course of her journey, she may have stolen away the lives of the young and innocent Rikas in all the worlds she has traveled to, feeling especially guilty for the Rika of the current world.

Out of respect for the original owner of that body, she decides to give the twisted version of herself who has been disillusioned after years of roaming the sea of fragments a different name. Here, she begins to call herself Frederica Bernkastel, with "Frederica" being a corruption of her own name and "Bernkastel" derived from the Bernkasteler brand of wine she is so fond of. "Furude Rika" in katakana [フルデリカ] is one character off from "Frederica" [フレデリカ]. Saikoroshi is the very first arc in which Rika has explicitly referred to herself by this name in the narrative.

Frederica's poems preface many of the arcs.

Frederica Bernkastel makes her first proper appearance and speaks to the reader about the Rules X, Y and Z that affect Hinamizawa in every Fragment.

Rule X is where someone succumbs to paranoia because of Hinamizawa Syndrome and winds up turning violent, using Keiichi Maebara, Shion Sonozaki and Rena Ryuugu as the prime examples.

Rule Y is where Jirou Tomitake and Miyo Takano are killed on the night of the Watanagashi Festival, marking the fifth year of Oyashiro-sama's curse.

Rule Z is where everyone believes the Sonozaki family are responsible for carrying out the curse every year amongst other things, which makes it difficult to find the true answers otherwise.

The manga adaptation has Frederica appearing in physical form and conversing with Rika about these Rules.

Frederica speaks to the reader once more and tasks them with connecting Fragments and revealing the truth of everything that happened before June 1983.

In a secret Fragment, unlocked after redoing the Fragments section after finishing the story once, Frederica in adult form explores a Fragment where she meets a young Miyoko Tanashi and averts the situation that led to her parents being killed. Afterwards, Frederica continues to have fun exploring other Fragments.

The final parody short special of Higurashi When They Cry Kai features a parody of the epilogue of End.

Frederica meets Mion, Rena, and Satoko. They call her "aunt" and wonder why they have never seen her before. They ask her if she's lost or has an age crisis, to both of which she replies negatively. She then also states that she is not an aunt, to which they tell her that she is because she appears to be over 20 years old.

In console releases of Higurashi from Kizuna onward, a final Fragment named "From Frederica to You" can unlocked in the connecting Fragments section, typically after completing all arcs featured in the corresponding game. 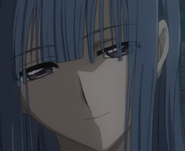 Frederica at the end of Higurashi Kai episode 24

Frederica appearing in the Minagoroshi manga 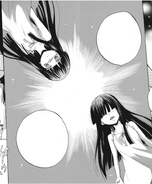 Rika is faced with her other self in the Minagoroshi manga