A woman with horns not unlike Hanyuu's. Calls Rika her "cat". Awards Satoko with the power to live in loops to provide her with entertainment. Satoko calls her "Eua", but her true name and nature are unknown.

Eua has purple hair in a hime cut and has a silver horseshoe-shaped pair of horns floating around her head. She wears a shrine maiden outfit with a green sash adorned with medals and holds a khakkara.

Eua speaks in a condescending tone and refers to humans as "child of man". She has a tendency to laugh and giggle when she's entertained by something, most especially because of Satoko's actions.

Eua can give humans the power of time looping, allowing them to travel between Fragments.

It is currently unclear as to who she is or where she came from, but she seems to recognize Satoko from another world with a "red sea". Eua describes herself as a nameless being and decided to call herself "Eua" after asking Satoko to create a name for her, getting "uhs" and "ohs" in response.

Hearing Satoko's wish to create a world where Rika can stay by her side, Eua bestows her with the power of time looping, similar to the one Rika has, except Satoko will be able to retain her memories when she dies unlike Hanyuu's power.

Eua regards Satoko as an old friend, referring to her with the names "Vier", "Mitsuyo", and "Anomalous Spinal Cord Specimen LD3105". She claims that Satoko has forgotten who she is after millions of loops. Eua derives a lot of entertainment from Satoko's actions in the various Fragments she goes to and is very fond of her.

Higurashi: When They Cry – GOU

When Satoko returns to Hinamizawa in 1988, she hears a sound coming from the ritual warehouse near the Furude Shrine and walks into it. Satoko hears the sound emanating from the Oyashiro-sama statue and touches it to reveal a horn-shaped object that transports her to the Sea of Fragments, where Eua is introduced standing before her.

Eua seems to recognize Satoko as an old friend and calls her by several names, regretting that Satoko doesn't seem to remember her. She knows of Satoko's wish to go back in time and fix her friendship with Rika, offering to grant her the power of time looping. The woman stipulates that Satoko must die for it to work and that it has a cost, but she won't mind so long as she's entertained by what Satoko does. Though Satoko is reluctant and confused, Eua sends her back to 1983.

As Satoko loops repeatedly trying to stop Rika from wanting to go to St. Lucia, Eua is entertained by Satoko's actions. After one of Satoko's many attempts, Eua explains Rika's past looping experience to Satoko and her Satoko to view the Fragments that Rika has experienced throughout her 100 years. After Satoko finishes, she asks if Eua can bestow the same time looping power onto her. The horned woman can, but she explains that the power of looping doesn't necessarily make the mind immortal. Eua bestows this power onto Satoko, making her able to retain the memories leading up to her death; unlike Rika and Hanyuu's own powers. She also grants Satoko the power to go to the same Fragment the original Rika goes to, so long as Satoko dies after Rika.

After Satoko experiences several loops, she asks for a name for the horned woman, wanting to have an easier time referring to her. The woman proclaims that she's nameless and asks Satoko to pick a name for her. Satoko struggles to think of one, and the woman decides to name herself Eua after Satoko's grunts of speculation.

Satoko's loops manage to reform Teppei into a better person. Eua reminds Satoko that the accumulation of memories is irreversible, and each new loop will make the memories grow stronger; Teppei remembering previous Fragments might be a burden to Satoko going forward. Satoko doesn't mind however, as she can use Teppei to great effect. Satoko expresses her desire to make Rika pay for wanting to leave Hinamizawa despite being Oyashiro-sama's priestess, and Eua decides that Satoko is the new Oyashiro-sama and will be carrying out her own curse.

Eua's first appearance in the story at the end of Satokowashi-hen Part 3. 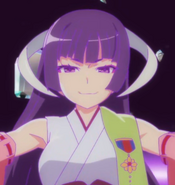 Add a photo to this gallery

Retrieved from "https://07th-expansion.fandom.com/wiki/Eua?oldid=90852"
Community content is available under CC-BY-SA unless otherwise noted.