The dark mysteries of Hinamizawa village unfold anew in the Curse Killing Arc! After a short trip to the city, Keiichi Maebara returns to the small mountain hamlet where he is welcomed with a fresh batch of pranks from Satoko and the rest of his school friends. Satoko may be the youngest of the group, but she always puts on the biggest smile. Who knew her upbeat attitude masked a terrible tragedy - a year ago her older brother, her only family, vanished without a trace. Keiichi's glad to step in and act as her big brother figure, but he can't shake the nagging questions about her real brother's disappearance. Transfer student? Teenage runaway? Or could it be...Oyashiro-sama's curse?

Hello, I'm Ryukishi07; I wrote the original story. I truly thank you for picking up "Higurashi WHEN THEY CRY: Curse Killing Arc" Volume One.

The "Curse Killing Arc" focuses mainly on Satoko, the junior classman who's like an upstart little sister. It really is heartwarming to see Satoko drawn so cheerfully and charmingly by Suzuki—sensei. But it's "Higurashi." it won't end with just the heartwarmingness....

The "Curse Killing Arc" is the third arc of the eight original arcs and has been called the most pitiable and vivid of the scenarios. That might be because the theme it deals with is a problem that is close to all of us. I would love it if you would read the comic through the eyes of the main character, Keiichi Maebara, thinking about what you would do if you were Keiichi.

Now, speaking of Suzuki—sensei, she's a shark! The rough drafts by this sense!, who has a perfect love for hammerhead sharks, always have a shark in the corner, no matter how vivid and shocking the scene may be. It's soothing (laugh).

To those who are meeting me for the first time and those who aren't, hello, I'm Jiro Suzuki. I sincerely thank you for taking this occasion to buy "Higurashi WHEN THEY CRY: Curse Killing Arc." ...Man, I really am glad that it came out safely. It's already been almost a year since I was given the Higurashi manga project. Time flies. Regardless of having easily imagined what kind of hellish, angry waves of schedule, which I had never before experienced, would await me if I accepted, since I had an original series I was working on, I agreed right away with such force that I might as well have said, "I won't let any other artist take it from me!" I still remember that day clearly. I mean, I could never forget it. And at the same time, I don't regret it.

While mixing with such subtle misunderstandings, I am writing today with my usual energy.

And as I work on the second half, Volume Two, of the third and longest arc of the original story, to be honest, every day I'm holding my head in my hands, thinking, "There aren't enough pages!" but I intend to go on drawing with maximum effort and nii-nii power, so that the rough drafts constantly dance on my tongue, without leaving out any of the many delicious scenes that remain. I hope you will support me. And if possible, please also look at my original series, "Record of Souta-kun's Akihabara Struggle," also on sale from G-Fantasy Comics. I mean, please buy it. Please (serious eyes). 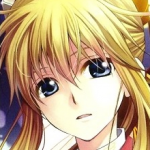