The ACR tends to value exceptional individual achievement over group action. The Cairo Squad is one among many squads composed of the best talent from the Aerial Augmented Infantry divisions serving under the ACR Combined Military.
Their unique kette is composed of three Responders.
Unlike kette from other factions, they're under no obligations to work in concert with each other, and each is allowed to do as they see fit. This might make it sound like there's no reason for them to be a kette, but their relationship — while unusual — is not a bad one, and they alternate between coordinating, protecting each other, and competing with each other, all according to their own rules.

This unique kette's surprising strength is that no formula can predict what they'll do, and in their friendly battles with people from other factions, all of their opponents are forced to admit that they were erratic and difficult to contend with.

In Chapter 2, alongside Squad 601, Cairo Squad participated as a representative for the Africa Commonwealth Realm in the International Battle Standard Festival. Later, they joined the Public Bath.

In Chapter 13, they participated in a ceremony with Squad 601.

In Chapter 23, they were active during the Drone Revolt.

In Chapter 25, alongside Squad 601 and other ACR Gauntlet Users, attacked other factions before the worldwide peace event.

Image from the Pre-release trailer.

Image from the OP. 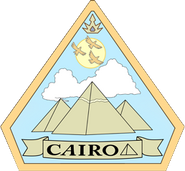 Cairo Squad at the International Battle Standard Festival
Add a photo to this gallery
Retrieved from "https://07th-expansion.fandom.com/wiki/Cairo_Squad?oldid=72578"
Community content is available under CC-BY-SA unless otherwise noted.