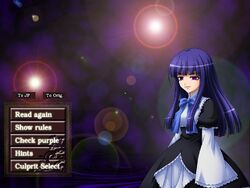 In Twilight of the Golden Witch, Bernkastel plays a game with Battler and Beatrice about a series of murders taking place on Rokkenjima. The murders follow the epitaph like in the main episodes, except characters will use purple statements. A character who isn't a culprit tells the truth when they speak in purple, but culprits may lie when they do.

At the end of Bern's story, the player must figure out who the culprit or culprits are. They may reread the twilights, access red truths and purple statements, or view hints, acted out in the form of discussion scenes between Battler and Beatrice. Making a wrong culprit selection will play a hint while making the correct choice will advance the story.

Forgery of the Purple Logic is a spin-off manga that follows a similar concept, encouraging the reader to find the culprit on their own. 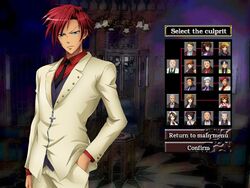 The family conference was taking place in the dining hall throughout the night. At 6:00 in the morning, Gohda heads there to make breakfast and discovers six bodies: Eva, Hideyoshi, Rudolf, Kyrie, Rosa, and Genji. Everyone then gathered in the dining hall, with the cousins confirming the deaths of their own parents. Nanjo and Kanon confirmed that Genji was dead. After inspecting the dining hall, they confirm it was completely locked earlier and there was nothing suspicious lying around. There was also nobody hidden, as the survivors were all gathered in the parlor. Natsuhi supposes that the servants killed the six and locked the dining hall with their master keys. The servants don't have alibis, but neither does anybody else. In any case, Genji's master key was destroyed to protect from misuse later on.

The external phone lines were cut, so nobody could contact the police. Krauss and Natsuhi went to the second floor to talk privately, and when they didn't return after a while, everybody got concerned. The internal line was used to send calls to Krauss and Natsuhi's rooms but no response came, leading everyone to think something happened.

Everyone heads to Natsuhi's room together, with Shannon unlocking the door to find Krauss and Natsuhi's bodies. Nanjo confirmed that both of them died instantly, with Jessica adding that the windows and doors were all locked. The servants were all together, thus they can provide alibis for each other. To preserve the crime scene, tape was placed on the doors and windows to seal them. The dining hall was then sealed in the same way. Determining that the mansion itself should be preserved, the survivors sealed every mansion door and window with tape and retreated to the guesthouse.

Shannon and Kanon went outside for an errand, making everyone worry when they didn't come back after a while. The group searches for Shannon and finds her body lying in the rose garden, with George having to accept that she was really dead. Nobody except George had an alibi, as everyone was checking the locks to the guesthouse. Shannon's master key was then destroyed.

The survivors hole up inside the cousin room and decide to double-check Nanjo, Kumasawa, and Gohda's testimonies. Inside the servant room, they find Gohda and Kumasawa's bodies, with Nanjo confirming that both of them died instantly. Once again, nobody has an alibi, with Jessica adding that with the way Gohda and Kumasawa died, the cousins and Nanjo couldn't have killed them. George thinks someone may have snuck in, but the guesthouse was still locked. Gohda and Kumasawa's master keys were then destroyed, leaving no keys left; nobody should be able to break into the guesthouse.

Nanjo was killed in the entrance hall of the guesthouse. The cousins find his corpse, with George confirming that the doctor died an instant death. Everything was locked, and there was no way for the cousins to kill him. There was proof that Nanjo never left the guesthouse, so how did he die?

Jessica flies out of the guesthouse in a rage and tries to find the culprit. The other cousins go after her, but they soon find her corpse lying on the ground. George and Maria confirm that Jessica died instantly, and Battler exclaims that none of the cousins could have killed her. George and Maria agree that the other is incapable of killing, and the narration ends.

Alibis for the servants

Layout of the mansion

Culprit of the first twilight

Seals on the room

Kanon and the master key

Is one of the 4 the culprit?

In the manga version of Bern's game, Battler presents an answer in the form of blue truth, transcribed below.