Baibao is deified in the COU for propaganda purposes, and are a one-man ace style team.

Currently the best of the Aerial Augmented Infantry squads across the COU, this kette is fated to reign supreme at all times.
Their kette is composed of one Attacker, one Responder, and one Supporter.
Baibao Squad is like a single swordsman built out of three people in well-defined roles, with Lingji as the attack sword, Momotake as the short sword in the other hand, used to attack and defend as needed, and Aysha as the  eyes and ears.
For that reason, some might fear that they would stop functioning if even a single cog was missing. However, in practice, this kette has performed excellently and stands at the peak of the COU Aerial Augmented Infantry.

Their specialty is achieving air superiority, and they're particularly focused on anti-Aerial Augmented Infantry tactics. As a side note, large numbers of kette in the Chinese military use the characters for white (bai) and leopard (bao) in their names in imitation of Baibao Squad, which can get a bit confusing at times.

Baibao is formally introduced in Chapter 2 at the International Battle Standard Festival. They later take the Public Bath Oath.

In Chapter 11, Baibao is sent on their first combat mission to destroy ABN mining machines.

In Chapter 17, Baibao leads COU forces against the AOU above the Amur River.

In Chapter 25, Lingji is killed by Miyao after the latter's Gauntlet is hacked by Toujirou.

The tab of Baibao on the official site.

Image from the Pre-release Trailer.

Image from the OP. 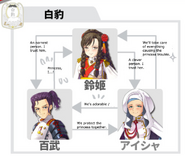