Azami the Vengeful
Fourth Rank of the School Youkai

All sorts of tea, Sumire[1]

Azami the Vengeful (復讐のアザミ, Fukushū no Azami) is the fourth ranked of the school youkai. She creates magical thistles that can give students the power of bullying.

Azami presents herself as polite and compassionate, appearing like a goddess of fortune to kids and enticing them to consume her magic thistles.

Azami likes to play with Sumire and pinch her cheeks, but she despises being called a hypocrite.

Azami represents one of the mysteries of the school, a magical thistle hiding among a garden of thistles that bullied kids can eat and become bullies themselves. Azami and Sumire hunt in tandem where Azami creates bullies, Sumire turns their classmates against them, and Azami gives the bully more thistles to keep the cycle going.

Azami is introduced attending the moon viewing festival with other school youkai.

A Thistle of Vengeance

The bullied kid Masaaki Yoshikawa meets Azami, who entices him to get revenge on all of his bullies and watches him eat one of her magical thistles. Yukari tries to stop Masaaki after his transformation into a bully and confronts Azami, who believes Masaaki is right in getting revenge and offers to give Yukari a thistle of her own to bully him back.

When Yukari learns of Sumire and Azami's plan to turn Masaaki into a bullied kid again, Yukari decides to eat one of Azami's thistles. Azami gives one to her, believing she will become a magnificent bully, however Yukari uses her new power to terrify her classmates into behaving and never bullying others. Even Azami and Sumire are shocked by her demeanor. Azami says this is how she wanted Yukari to turn out anyway.

Before the Spider Lilies Bloomed

Azami and other youkai reminisce on the past.

In this dream world, Azami and Sumire discuss Yukari's control of the class being like a dictatorship. 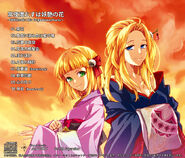